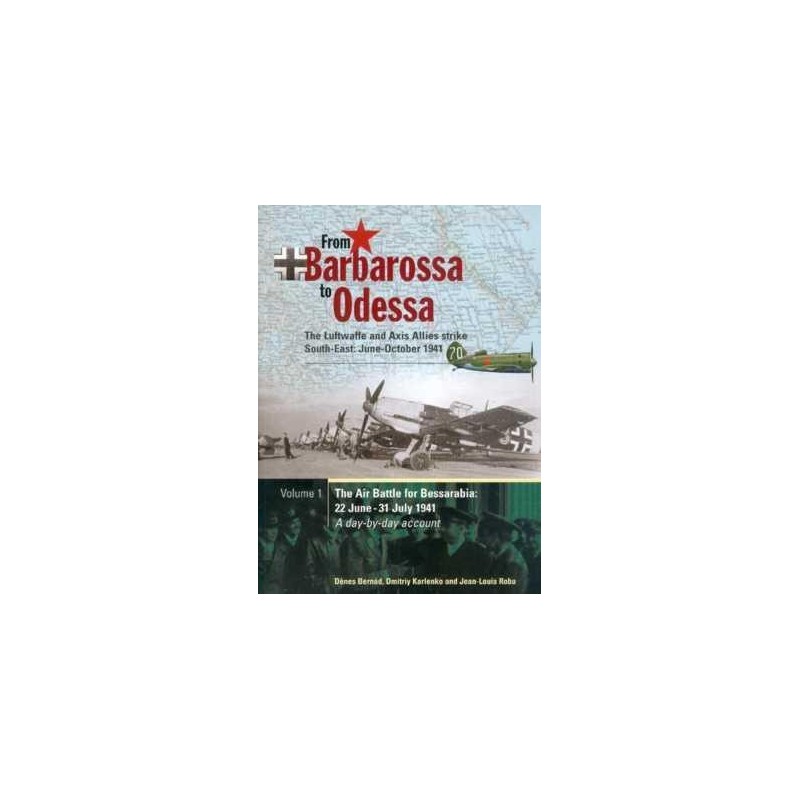 FROM BARBAROSSA TO ODESSA. Volume 1: The Air Battle for Bessarabia.

FROM BARBAROSSA TO ODESSA: The Luftwaffe and Axis Allies Strike South-East, June-October 1941 Volume 1 - The Air Battle for Bessarabia, 22 June - 31 July 1941.

New and often unexpected and controversial information continues to emerge on the massive air campaign fought over the Russian Front during World War 2. This book is the first of two volumes, the result of lengthy and meticulous study, on the air combat which took place on the southern flank of the Eastern Front following Operation Barbarossa. The period covered in this first book saw the occupation of Bessarabia and southwest Ukraine and concluded when the areas regional capital, Odessa, was captured by the Germans on 16 October 1941. It was one of the most bitter and intensive air campaigns fought in the east. This was due to the fact that local Soviet commanders took the initiative and dispersed most of their assets in time, thus preventing their destruction on the ground. This gave them the ability to respond effectively to the combined Axis onslaught. Accordingly, the Red Air Force was able to achieve some of its greatest successes of 1941 in this little-studied campaign.

The often overlooked involvement of aircraft from Axis states other than Germany, such as the Romanians who claimed a total of over 600 air victories, the Hungarians, the Slovaks and even the Bulgarians, is covered in this book. This makes the subject varied and of great interest, particularly because of the large variety of aircraft types employed by both sides, all of which are fully documented. Aided by a large number of previously unpublished photographs, the book tells the story of the campaign from both sides and provides detailed eye-witness accounts from individual pilots who were involved in the fighting. Besides day-to-day operations, appendices will contain comprehensive victory and loss lists. Produced by the acknowledged experts in this important, but often overlooked theatre of operations, the two volumes of From Barbarossa to Odessa: The Luftwaffe and Axis Allies Strike South East, represent a major contribution to the available literature on the subject. The books will be essential reading for historians of the air war in the east, historians of the Luftwaffe and its allied air forces, and all aviation modellers.

FROM BARBAROSSA TO ODESSA. Volume 1: The Air Battle for Bessarabia.