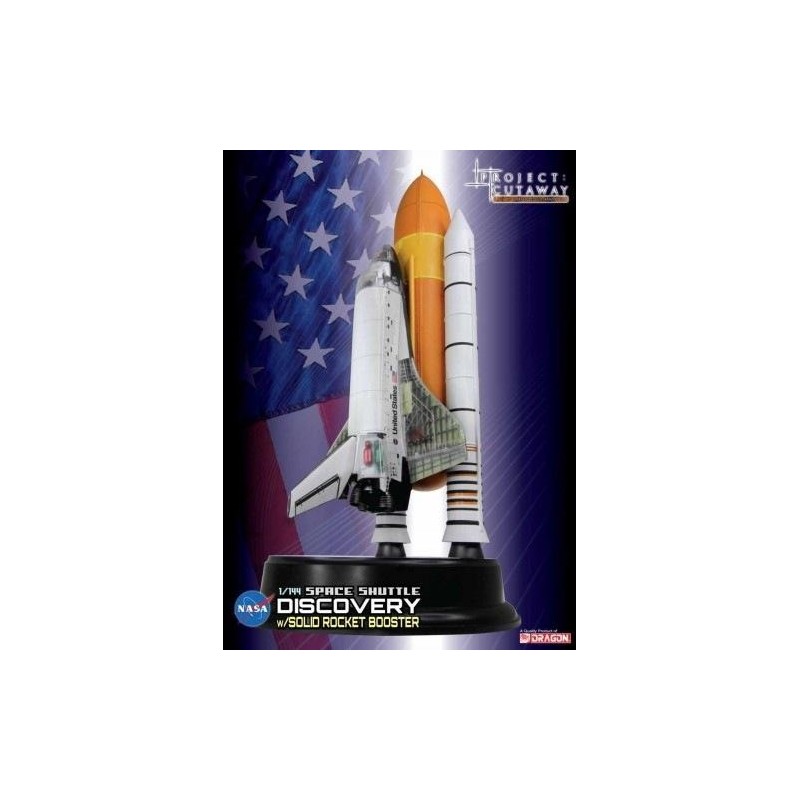 This 1/144 scale item is searing hot! It features a Space Shuttle with its transparent cross-sectional nature revealing much of the interior. The cockpit, wings and engines have all received Dragons fascinating cutaway treatment! The rest is carefully pre-painted and accurately detailed, and collectors can quickly snap together the major subcomponents in no time at all. This model allows collectors to celebrate the end of an era and the remarkable 30-year lifespan of the Space Shuttle fleet. The model comes with its own circular stand that allows the assembly to be safely displayed as though it is about to launch vertically on one last mission. This Project Cutaway model makes a poignant desktop decoration for Space Shuttle fans!

Within its innovative Project Cutaway range, Dragon has previously produced some scintillating 1/144 scale models. Now one of the most exciting ever is on offer a Space Shuttle attached to two giant Solid Rocket Boosters (SRB)! From 1981 to 2011, the Space Shuttle was a permanent fixture in the annals of space exploration. The public got used to NASAs fleet of five manned space vehicles Columbia, Challenger, Discovery, Atlantis and Endeavour regularly blasting into space, and they also suffered collective shock when two Shuttles were lost in horrific accidents. In its 30-year operational lifespan, the Space Shuttle fleet performed 135 missions. These included launching the Hubble Space Telescope, numerous satellites, constructing and servicing the International Space Station, and conducting experiments. The SRBs were required to thrust the Orbiter Vehicle (OV) into space, and they were jettisoned before reaching orbit. The Shuttles retirement officially took place from March-July 2011, with Atlantis the last craft to fly a mission.