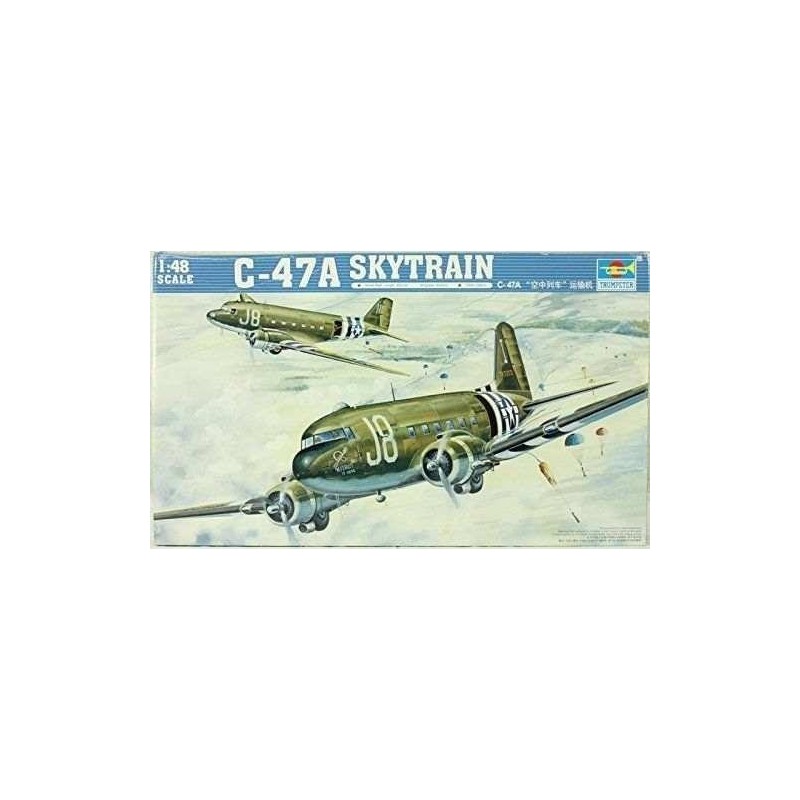 The Douglas C-47 Skytrain was a military adaptation of an available commercial airliner in production during the outbreak of World War II. This commercial aircraft, the DC-3, was first developed in the mid-1930s as a result of the success of their DC-2 airliner, but adding additional features sought by the airlines. The DC-3 was a tremendous success and transformed civil aviation in those days leading up to the war.

The DC-3 was transformed into the most important allied airlift asset in World War II by simply removing the commercial interior, fitting a reconfigurable cargo/passenger compartment, adding large cargo and paratroop doors to the port side, among other changes. The initial C-47 was the first adaption of the DC-3 with these changes and nearly 1000 were produced. The C-47A added a 24 volt electrical system and over 5200 of these versions were produced. The C-47B changed the engines to supercharged R-1830 engines and more fuel for flights over the China/Burma/India 'Hump'. The Navy designated their C-47s as R4D. The Army Air Corps did not exclude the available DC-3s from military service, but these retained most of their passenger service fittings and were pressed into service as the C-48. In RAF service, the C-47 became the 'Dakota'. In operational service however, the aircraft drew the nickname of the large seabirds of the Pacific - the Gooney Bird.

Trumpeter has released their 1/48 C-47A kit! This subject came as a bit of a surprise when images of the test shots started appearing on the internet a number of months ago. Until this kit came along however, the best kit of the C-47 was the Monogram (now Revell) 1/48 scale kit, which has recently been re-released with new parts to render the AC-47 gunship. With a suggested retail price of $31.50 USD, the Revell kit is roughly 1/5 the price of this new Trumpeter kit. So of course that begs the question "Is it worth the difference in price?" Let's take a look:

The kit is molded in light gray styrene and presented on 10 parts trees, plus two trees of clear parts, one fret of photo-etched details, one set of rubber tires, and one set of white metal main landing gear struts. The detailing is all finely scribed including the now-standard Trumpeter recessed rivet details. Fortunately, the rivet detailing is not excessive and if there was ever an aircraft with rivet details, the 'Goon' was it.

The detailing inside the airframe is really impressive, from a well-appointed flight deck, radio operator/navigator's compartment, and extending into the main troop/cargo compartment. The cockpit is the nicest I've seen for this subject and Trumpeter has definitely captured the look and detail. How much of that detail you'll see through the windscreen is another matter.

The compartment between the cockpit and the troop compartment houses the radio racks, the navigator/radio operator, and galley. Trumpeter has really done this area up nicely, but how much of that beautiful detail will be visible after assembly is the question. If someone were to build this as a cut-away project, you'd really have something to show off here.

The troop compartment has separate 'bucket seating' from the cargo floor. While the instructions are set for a D-Day paratroop airlifter, you have the flexibility to render a cargo aircraft as well. This is the first C-47 model to render the overhead lighting in the cargo compartment, a detail that is easily seen after assembly.

Like most Trumpeter kits, the engines are nicely detailed and will look great with or without the cowlings installed.

The wings are naturally a simple portion of the assembly process, but these are attached to the fuselage using dual main spars for strength and alignment of the wing/fuselage joint.

The flight control surfaces are all molded separately. The ailerons, elevators, rudder, and flaps are all separate and positionable. On an older tail-dragger, the dropped flaps and drooping elevators are visible details overlooked by modelers.

One interesting 'glitch' in the kit are the ailerons. The kit provides two sets of styrene 'hinges', one for a neutral ailerons, and one for dropped ailerons. In other words, Trumpeter seems to have extended the landing flaps out to the ailerons to create full-span flaps, and while this is an innovative feature, the concept of a STOL Goon didn't exist back then. Don't use the drooped hinges in this kit!

As I mentioned earlier, the engines are a major plus in this kit with all of the plumbing for the intake manifold, exhaust collector ring, and plumbing that even extends into the main wheel wells. If you pose your C-47 undergoing maintenance with the cowlings removed, you won't need any aftermarket stuff to make this work.

The main landing gear struts are provided as white metal or styrene, your choice. Either way, the main wheel hubs install on the rubber tires and an axle through the hubs provide the attachments to the main struts.