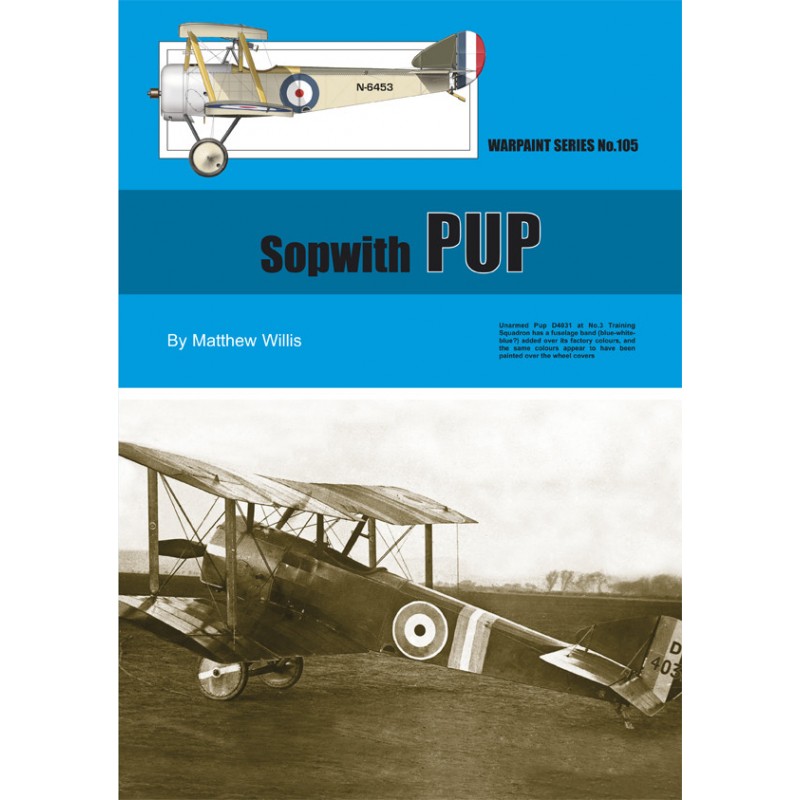 The Sopwith Pup, as it is unofficially but universally known, was one of the first true British fighter aircraft, and one of the most significant of the First World War. It played a key part in maintaining control of the skies over the Western Front during and after the RFC's toughest period, Bloody April, 1917.Its superb flying qualities kept it competitive as ever-faster and more powerful opposition appeared, and it played an unglamorous but important role in the defence of the UK against zeppelin and heavy bomber attacks, and was fundamental to the development of ship-based aviation.With the very well-established categories of military aircraft that are familiar today, it is hard to comprehend the world in which the Pup was born, where these clear delineations did not exist. Certainly the idea of the fast, agile single-seat fighter was barely thought of when the Pup's outline was first chalked on the floor of the experimental workshop at Sopwith's Kingston-upon-Thames premises in 1915.The new aircraft was known as the 'Sparrow', was powered by a 50hp Gnome rotary. Test pilot Harry Hawker took the aircraft to Brooklands and amazed trainee RFC pilots by flying it under the bridge across the Byfleet Banking.It was fully aerobatic and capable of a speed just shy of 85mph despite the low engine power. It is unclear whether Sopwith intended the machine to form the basis of a military aircraft but in any event, its performance and handling, even on such low power, must have recommended it for that purpose. The 'Sparrow' therefore became the progenitor of the aircraft that would become the 'Pup'.It was around the time of the prototype's first appearance that the Pup seems to have gained its popular name. Brigadier-General SeftonBrancker, then the RFC's Director of Air Organisation, is reputed to have remarked, on seeing the prototype Scout beside its larger sibling at Brooklands, 'Your 1 Strutter has had a pup!' For all its value as a front line fighting aeroplane, the Pup had a potentially even greater impact on the development of naval aviation; in particular, the sometimes tortuous path of launching aircraft from, and returning them safely to, ships at sea.Moreover, the Pup became one of the more successful operational aircraft in this fledgling area of combat.This is the first WWI title in the series and includes all the usual Warpaint features historical text, modellers glossary, colour artwork by Richard Caruana and a three page colour walkaround by author Matthew Willis.