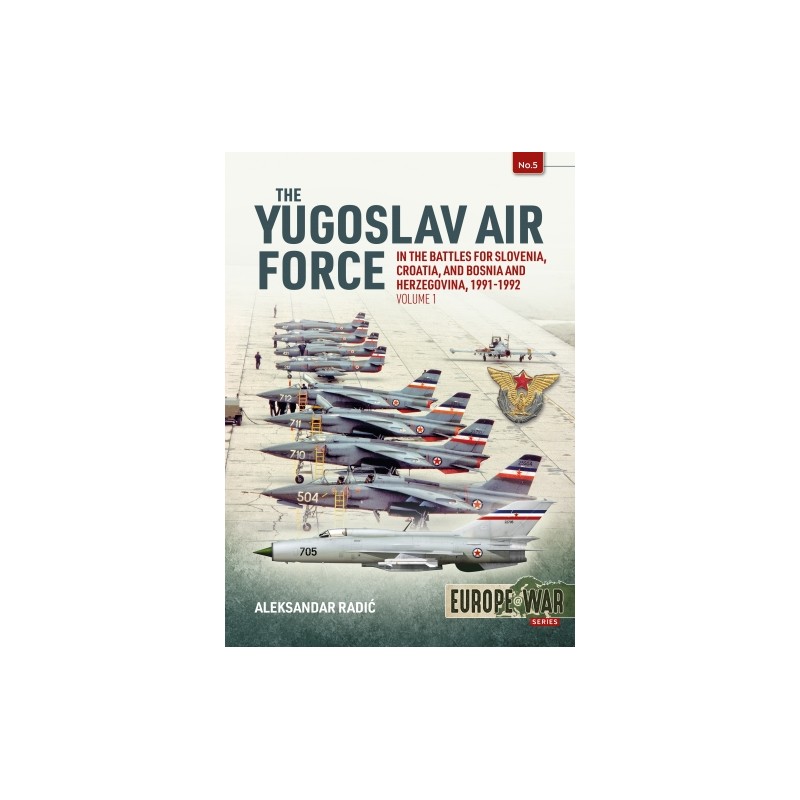 THE YUGOSLAV AIR FORCE. In the Battles for Slovenia, Croatia & Bosnia ....

THE YUGOSLAV AIR FORCE. In the Battles for Slovenia, Croatia and Bosnia and Herzegovina, 1991-1992. Vol. 1.

During the late 1980s, the former Socialist Federal Republic of Jugoslavia (SFRJ) – a country dominating the Balkans – experienced a period of major crisis. Led by the Communist Party, the nation’s leadership failed to understand the depth of political changes all over Eastern Europe, and then split along ethic lines. In 1988-1989, ethnic Albanians in the autonomous province of Kosovo began demanding independence: the authorities of the SFRJ reacted by suppressing the resulting demonstrations. In the Federal Republic of Serbia, public opinion slid into nationalism, which the local communist leadership exploited to maintain itself in power. By 1990, nationalistic leaders rose to power in Slovenia and Croatia, and publicly announced their intention to secede these federal republics. Under the heavy shadow of growing war-mongering, politicians from all three sides met to reach settlements on the division of their and their emerging nation’s interests. The last few influential supporters of the preservation of a federal state were quickly pushed aside, and the powerful military of the SRFJ – the Yugoslav Popular Army (Jugoslovenska Narodna Armija, JNA) – became an instrument of political games. The Slovenian and Croatian proclamations of independence, in June 1991, proved to be the drop that over spilled the barrel. Already split by deep rifts within their top political and military leaders, the federal authorities launched a rather confused attempt to recover control over the external borders of the SRFJ. The nascent Slovenian military resisted, causing a series of bloody clashes with the JNA.## Tasked with the transport and protection of federal employees, the Yugoslav Air Force and Air Defence (JRViPVO) found itself in the thick of combat from day one of this conflict, when the Slovenes shot down two of its helicopters. In return, the JRViPVO began flying attack sorties, which ended only through a political agreement of 2 July 1991, and the decision for Yugoslav authorities to withdraw from Slovenia. Hard on the heels of this drama, the conflict between Croats and Serbs in Croatia reached boiling point, in the summer of 1991. Slowly at first, a major war erupted, which caught the JRViPVO in a paradoxical situation as part of it was still undergoing training, while another part had to fly shows of power, and undertake reconnaissance, transport and then the first combat operations. By September 1991, the conflict turned into an ugly slugging match: Croatian forces had blocked numerous military bases and major storage depots while the JNA received orders to lift the sieges of its surrounded units. Amid the following civil war, the JRViPVO often found itself forced to take drastic decisions, like when one of its units was relocated from the Federal Republic of Macedonia to Pula in Croatia, to fly combat sorties over the local battlefields. For the JRViPVO, the war in Croatia ended through a political settlement and a cease-fire of 3 January 1992. However, only weeks later the force was to see its final action in Bosnia and Herzegovina, where it flew combat operations against local separatists. While another political agreement resulted in a withdrawal of all federal forces from this part of the former Yugoslavia on 19 Mary 1992, and the loss (and destruction) of the major air base outside Bihac, this was also the swan song of the once proud Yugoslav air force. Based on the author’s unique approach to local archives and first-hand sources, and illustrated by over 120 photographs and colour profiles, the ‘JRVIPVO in Yugoslav War’ is the first ever authoritative account of combat operations of the former Yugoslav Air Force in the conflict that shaped the modern-day southern Europe, and an indispensable source of reference on contemporary military history of this part of the World.

THE YUGOSLAV AIR FORCE. In the Battles for Slovenia, Croatia & Bosnia ....