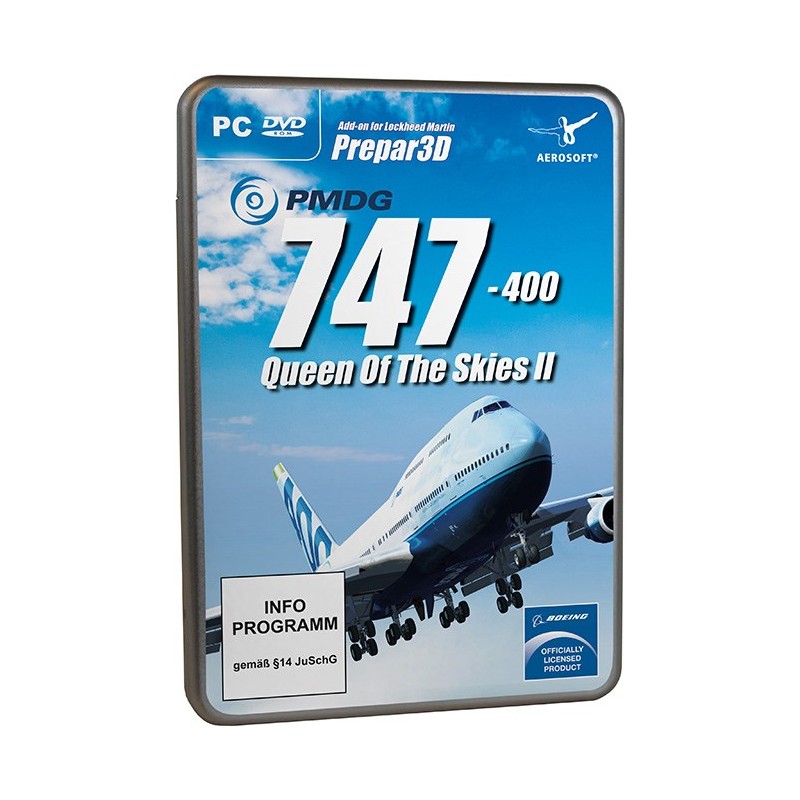 The most iconic silhouette in aviation. PMDG is proud to present a new simulation of the Queen of the Skies - the Boeing 747-400.

Developed over three years and building upon all of the award-winning features of the PMDG 737NGX and PMDG 777 products, the PMDG 747-400 Queen of the Skies II is our most magnificent creation yet.

We have included every variant of the aircraft in this single package. The ubiquitous passenger 400 and freighter 400F models, the cargo-converted BCF, the "combi" 400M model, the extended range 400ER and 400ERF, and even the rare 400D domestic model that was used in Japan. Each variant is modelled with accurate weights, range and engine options.

No less than 35 pages of detailed options from the world's 747-400 fleets are modelled. From the highly visible ones like antenna types and position all the way to obscure cockpit display and FMC options that real-world crews will recognize, it is the most complete set of options ever placed into an P3D addon aircraft.

. Complete From the Start

The Virtual Cockpit includes dozens of physical layout options: ADF, ISFD vs analog standby gauges, RMIs, window frame styles, cockpit lavatory option, paravisual display (PVD), push to talk and taxi light options, and many more that are specific to aircraft model type as well as airline/operator specific options. The VC's geometric modeling work is amazingly complete, accurate down to fractions of an inch as measured in the real cockpit.

Have your 747-400 serviced by an entire fleet of PMDG Service vehicles. Each vehicle for a specific ground task is included. These are: Aircraft hydrant fuel pumper, catering and cabin service trucks that lift to the cabin doors, air-stair trucks, a bulk cargo loader, standard size hi-lift loaders for the lower deck cargo holds as well as the large hi-lift loader for the SCD and nose doors of the freighter models. Need the water tanks filled? A water truck will roll up to the aircraft along with a lavatory servicing vehicle to empty waste. You also get tail stands for the freighters, single and dual-plug GPU carts, terminal power units, as well as air start and air conditioning carts. Everything needed to service your airplane on the ground is included in the PMDG 747-400 Queen of the Skies II!

Includes the PMDG Operation Center, a stand-alone application which manages livery downloads and installations, documentation, support and more. The OC also supports the PMDG Jetstream 4100, PMDG 737NGX and PMDG 777. We update this application frequently to add new features and functionality. New for the PMDG 747-400 Queen of the Skies II is micro-update capability directly through the OC. We intend to update the aircraft frequently through this feature rather than using new installers or service packs.could see.

The flight management computer (FMC) contains all of the real life 747-400 FMC features including LNAV, extremely accurate VNAV speed and altitude predictions and the full complement of scratchpad warning messages that a real crew could see. RTE 2 is modelled and fully usable, as are advanced features like step-climbs, constant speed cruise and required time of arrival (RTA).

Engine and flight modeling is within 5% of the actual Boeing aircraft performance charts, including data and parameters specific to the Pratt & Whitney, General Electric and Rolls Royce engine types.

Ultra smooth autopilot flight director system (AFDS) created for the 747 that replicates the precise yet smooth feeling you get from the real thing. Created with hours of video taken in the real airplane and actual 747-400 full flight simulator flying experience.

The PMDG 747-400 Queen of the Skies II features a working simulation of the Collins WXR-2100 weather radar. In conjunction with the Active Sky Next weather engine addon, the radar depicts actual precipitation returns (not clouds!) and gives you full control over tilt, gain and radar mode including turbulence and windshear detection. Integration with additional radar products such as REX WX Advantage coming soon!

A meticulously created soundset consisting of over 1200 individual files captures the raw power of the Pratt & Whitney, General Electric and Rolls Royce engines and cockpit environment. Every aspect of the engines is represented here, exactly pitch matched to real life recordings made at every 10% over the engine’s power range. Many cockpit sounds have multiple files behind them that are randomly selected to make each click sound subtly different, just like they do in the real world. Multiple soundsets exist including detailed modelling behind and in-front of the wing views. A new fully custom playback system allows for manipulation of the engine sounds as altitude and airspeed rise, allowing the slipstream to take over just as it does in real life. Two separate sets of ground crew calls are included and it will be possible in the future to create new sets yourself! Note: stereo soundset included, 5.1 soundset will be made available post-release.

A fully customized and realistic simulation of cockpit camera shake is included. This feature reacts realistically to the environment on the ground during taxi, takeoff and landing, as well as in-flight due to turbulence, stall buffet, speedbrake application and engine failure or stall.

Fully functional Runway Awareness and Advisory System which calls out runway names and other information for improved flight safety.

We’ve spared no effort in making the PMDG 747-400 Queen of the Skies II easy to use in terms of its user interface. The aircraft’s fuel, payload and the large number of airframe and cockpit options are adjustable on the fly from the FMC CDU without ever touching the P3D menus or pausing the sim.

3D volumetric exterior lighting that lights up the FS scenery. You can even see the flash from the strobe lights when looking out the cockpit side windows. Improved over what was implemented in the PMDG 777.

Free downloadable liveries for numerous world airlines, easily installable using the Livery Downloader within the PMDG Operations Center application. At the time of release, well over 60 liveries were available in the OC with more being added every day.

Includes everything you will need to operate the PMDG 747-400 Queen of the Skies II. We’ve also included a 168 page introduction manual specific to the simulation and a 113 page tutorial flight to learn from as you fly.

- Windows 7 64-bit (older OSes such as Windows XP may work, but we cannot guarantee compatibility or support)

- Video card with at least 1 GB of VRAM, DirectX 9 compatible Nvidia or ATI card (Onboard motherboard or CPU video is not supported, some of the newer Intel designs may work but we cannot guarantee compatibility)

- Windows 10 64-bit (older OSes such as Windows XP may work, but we cannot guarantee compatibility or support)

*Product tested with Lockheed Martin Prepar3D v3.4 and up, not compatible with older versions of Prepar3D.