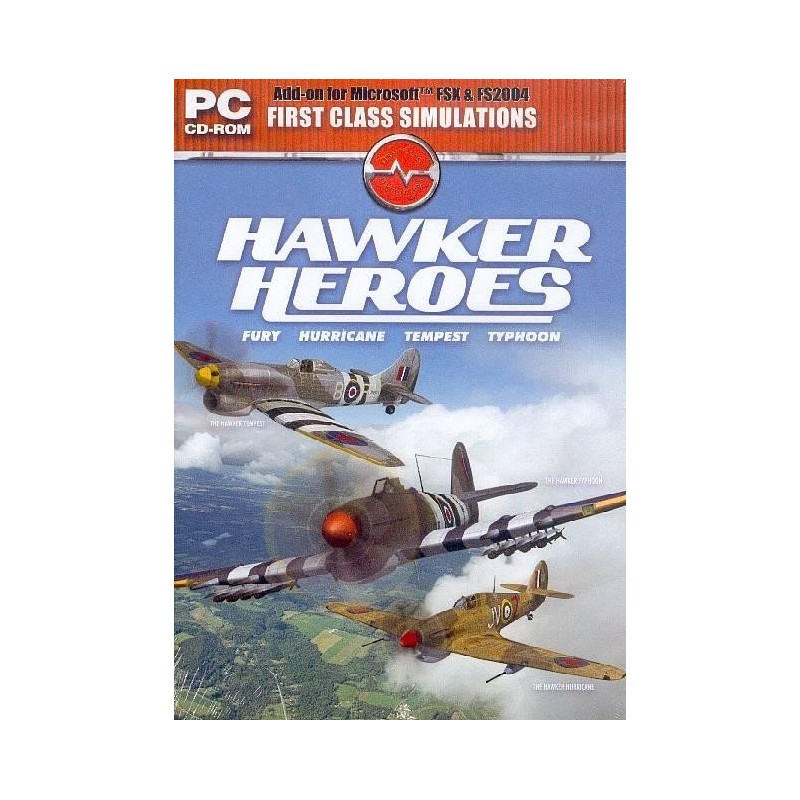 The Hawker Heroes Package is a collection of 4 iconic aircraft designed by Sir Sydney Camm and the Hawker design team. First of all, the 1930s Hawker Fury biplane, and then 3 legendary WWII Aircraft: the Hawker Hurricane, the Hawker Typhoon and last but not least, the Hawker Tempest. I have to be honest here, WWII aircraft are not my specialty, but I like them none the less, and I knew all aircraft here more or less before reviewing this package. The installer works both in FS9 and FSX, but since I only have the latter, I couldnt test in FS9. Besides the 4 aircraft (each with several liveries) this package delivers 2 missions if you install it on FSX, both using the Hawker Fury.

The 1930s Hawker Fury is the oldest aircraft in this package. The version in the Hawker Heroes package is the Fury Mk1, and comes with 5 different liveries, ranging from 1932 to 1942. Note the difference between the biplane Fury from the 1930s (this one) and the Hawker Sea Fury from WWII, which was a monoplane.

Everybody who knows anything about WWII aviation (and lots of people who dont) know the Hurricane. Although not as famous as the Spitfire, it was the true hero of the Battle of Britain. The version included here is the Hurricane Mk IID. The IID was equipped with 2 giant under wing cannons. Although these pose a performance penalty, they really look cool (although useless) in FSX. Four different liveries are included.

This really is a beast of an aircraft. Its big, it has a powerful engine, and its armed to the teeth. Maybe the best ground attack aircraft of WWII, it really is an impressive aircraft. Hawker Heroes includes 2 models of the Typhoon, one with rockets and one without. This is also the number of available liveries: 2.

The Hawker Tempest is in essence an improved Typhoon. Equally large and impressive, its performance is even better. As the most prominent aircraft of the package, this one comes with 6 different liveries.

Based on modeling of the aircraft, both exterior and interior, we can split the aircraft up into 2 groups. At first the Fury, Hurricane and Tempest, and second the Typhoon. The reason for this is simple: the first three are all made by the same studios, the Typhoon is made by another developer. Unfortunately, this also divides them on quality.

The Fury, Hurricane and Tempest are all modeled into great detail and in great quality. I really have no remarks on the models, other than the wheels. They (especially noticeable on the Hurricane) couldve used some more details, even if it costs some extra polygons. Theyre just to rectangular in shape now, when seen from the front or back.

The Typhoon is another story. The modeling here is just not up to scale. It might have been good in the early days of FS9, but it sure isnt anymore, compared to the high quality add-ons that are released everywhere, and indeed compared to the other 3 aircraft in the package. The entire model of the Typhoon has sharp edges where there are supposed to be curved lines, the horizontal stabilizer looks like its made by a 3 year old in clay, and the wheels arent even round!

The modeling of the VC is the same: very good in the Fury, Hurricane and Tempest, although its very clear they were made by the same people. The Typhoon stands out, but unfortunately not in a positive way. It has a decent VC, but there are just some very basic mistakes. The biggest and most noticeable example is that the throttle and prop pitch levers move through each other. The same with the animations, they look pretty good on the first three aircraft, but there are some serious flaws on the Typhoon. Just to name some: the right aileron moves wrong, and the tail wheel looks like its welded to the fuselage.