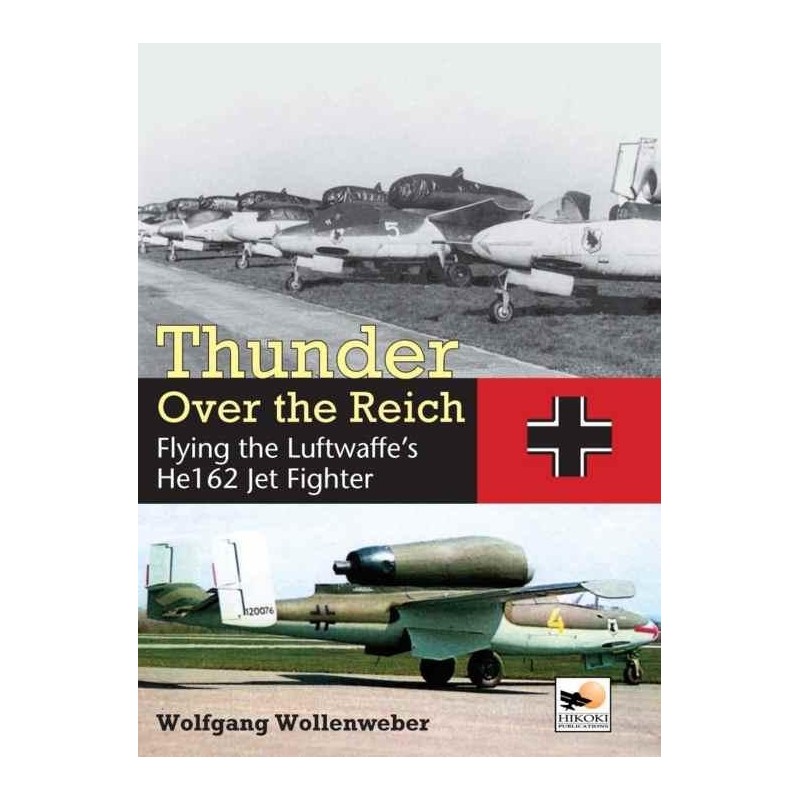 THUNDER OVER THE REICH. Flying the Luftwaffe's He162 Jet Fighter

First Lieutenant Wolfgang Wollenwebers WWII odyssey, from combat operations in the Me110 over Russia with the Arctic Sea Hunters, to pitting the extraordinary HE162 jet fighter against Allied fighters over Germany, and flying possibly the final Luftwaffe mission of WWII, may be the last great untold story from a WWII Luftwaffe pilot.

Posted to the Arctic front in 1943, Wollenweber flew ME110s on escort missions and ground attack, shooting down several Soviet aircraft in the process, for which he was awarded the Iron Cross First Class. As the fortunes of the war turned against the Third Reich, Wollenweber volunteered for defence duties and soon found himself training to fly the lethal Me163 Komet rocket fighter, before being transferred to the innovative wonder weapon the He162 Jet Fighter.

The He162 Volksjäger (Peoples Fighter) was meant to be capable of being flown by members of the Hitler Youth with only rudimentary flying experience, but instead turned out to be an unforgiving machine in untrained hands and whilst Wollenberger himself became one of the most experienced He162 pilots, he witnessed the brutal human toll it exacted on the unwary or unlucky. And as one of the few pilots to have flown the He162 in combat, he finally settles the vexed question of whether the He162 ever shot down an Allied aircraft.

Wollenweber describes in his own words the shocking truth of the last desperate days of the Third Reich, and does not shy away from describing the horrors he witnessed and naming the corrupt and incompetent individuals he came across. This is a vividly told story and an important inside account not just of the revolutionary He162, but also the changing fortunes of the Luftwaffe - from happy hunting on the Russian front to its final disintegration over a destroyed homeland.

THUNDER OVER THE REICH. Flying the Luftwaffe's He162 Jet Fighter