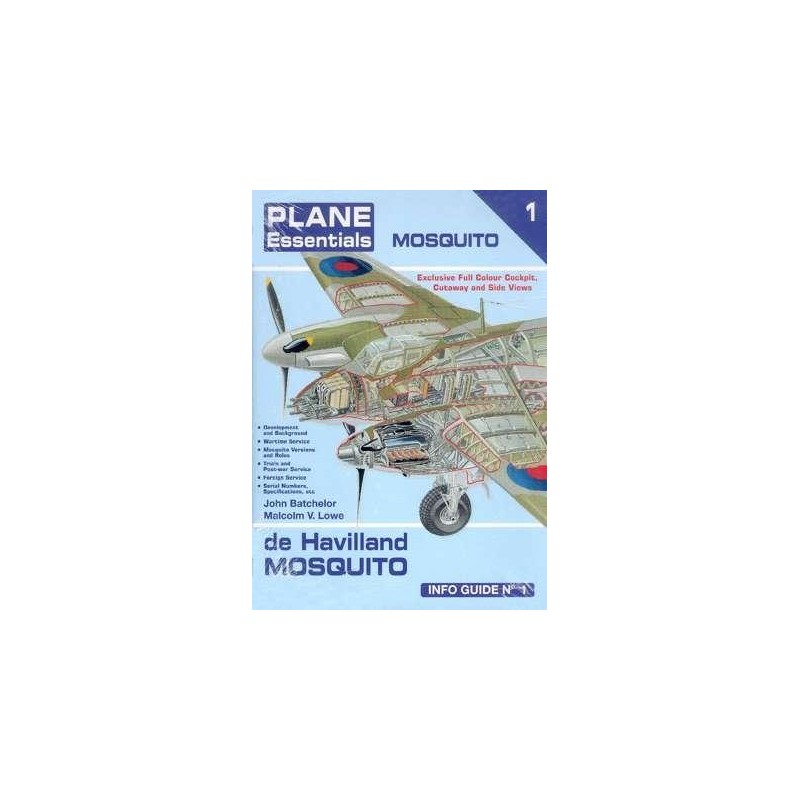 - Welcome to the Plane Essentials InfoGuide No.1, which takes as its subject the world-famous de Havilland Mosquito. This monograph is the first in an important new series of publications on specific aircraft types that have been significant in the history of aviation, from the earliest times to the present day. In one straightforward reference source is the story of this renowned aircraft, backed up with illustrations that show the Mosquito in many of its successful roles and variants. The InfoGuide series aims to educate but at the same time stimulate interest in the aircraft types that are covered in the series, and act as an encouragement for further research and reading. The series is aimed at enthusiasts as well as model makers, and follows the format that has become much favoured and successful in recent years of combining text, photographs and colour scheme information in one practical but wide-ranging reference.

Mosquito InfoGuide No.1 tells the story of the famed and highly-versatile de Havilland D.H. 98 Mosquito twin-engined fighter-bomber, reconnaissance aircraft and night-fighter, and the vital roles that it played in World War Two for the British and Commonwealth aircrews who took this excellent aircraft to war. Individual chapters detail the types development, operational service, and many other aspects of this highly significant warplane. Nicknamed the Wooden Wonder, the Mosquito was unique amongst major Second World War combat aircraft by including wood as a major part of its construction. It was one of the most important Allied warplanes of that conflict, and it also saw valuable service after World War Two for a number of air forces around the world.

Featuring contemporary photographs, text by aviation historian Malcolm V. Lowe, and the well-known artwork of John Batchelor, together with several side-view illustrations from the similarly celebrated illustrator Mark Rolfe, Mosquito InfoGuide No.1 portrays the Mosquito in its many variants and sheds light on the diverse colour schemes worn by operational Mosquitoes. Informative illustrations show details such as cockpit interiors and equipment, while cutaway drawings demonstrate the Mosquitos inner features and its unique construction. The colour side-views, specially researched by Mark Rolfe and Malcolm Lowe, cover less run of the mill subjects which will be an inspiration to model makers to explore the less well-known colour schemes worn during the long service history of the Mosquito. A separate section lists manufacturers of scale models and accessories that are available to allow accurate replicas to be built of this important warplane. Mosquito InfoGuide No.1 is an affordable and detailed reference source for enthusiasts, historians and model-makers, and adds to the available published knowledge on this important British warplane.