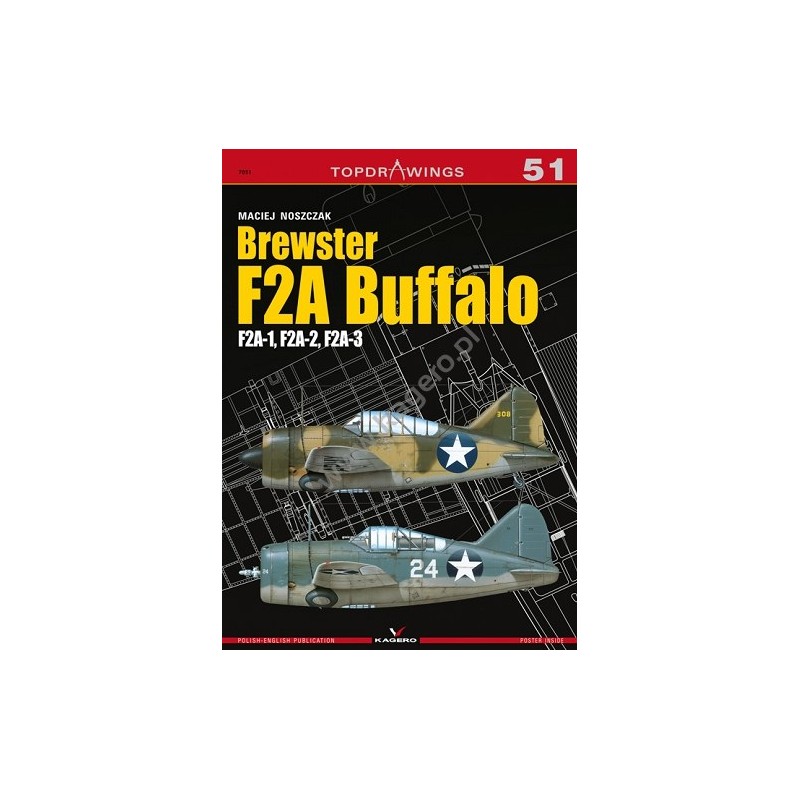 The first batch of the F2A-1 Buffalos picked by US Navy from the Brewster factory between May and December 1939 were powered by Wright 1820-34 Cyclone engine. Moreover they differed from the XF2A-1 prototype in enlarged canopies. F2A-1s were equipped with telescope sights. Antenna masts were moved from left to right side of upper fuselage in front of the cockpit. The landing light was relocated from the bottom left engine cowling to the left wing underside. Wing tips were shortened. Lower part of the leading edge of vertical stabilizer received a profile reaching further on, up to the back frame of the cockpit. The F2A-2 received a new engine: Wright R-1820-40, which extended the weight of the front part of the plane. To keep the centre of gravity unchanged, the nose part was shortened by 12 cm. Bigger engine demanded enlarging and redesigning the cowling. The Hamilton Standard propeller was replaced by Curtiss Electric model. The exhausts were moved from the lower part of engine masks to the wing level. The armament was unified and consisted of four .50 cal Browning M2 machine guns. There were also 50 kg bomb racks installed.The Model 339B ordered by Belgium had the catapult mountings removed, as well as arresting hook, radio and antennas. It was powered by Wright R-1820-G105 engine. The removal of the hook caused the necessity of modifying the tail cone. Its new shape lengthened the plane slightly.The F2A-3 ? last serial version of Buffalo ? had another modification in the nose area. It had the same engine as its predecessor and propeller without the nose-cap. Nose of the fighter was lengthened by 25 cm. It also received a new fuel tank which enlarged their overall capacity up to 1100 liters.