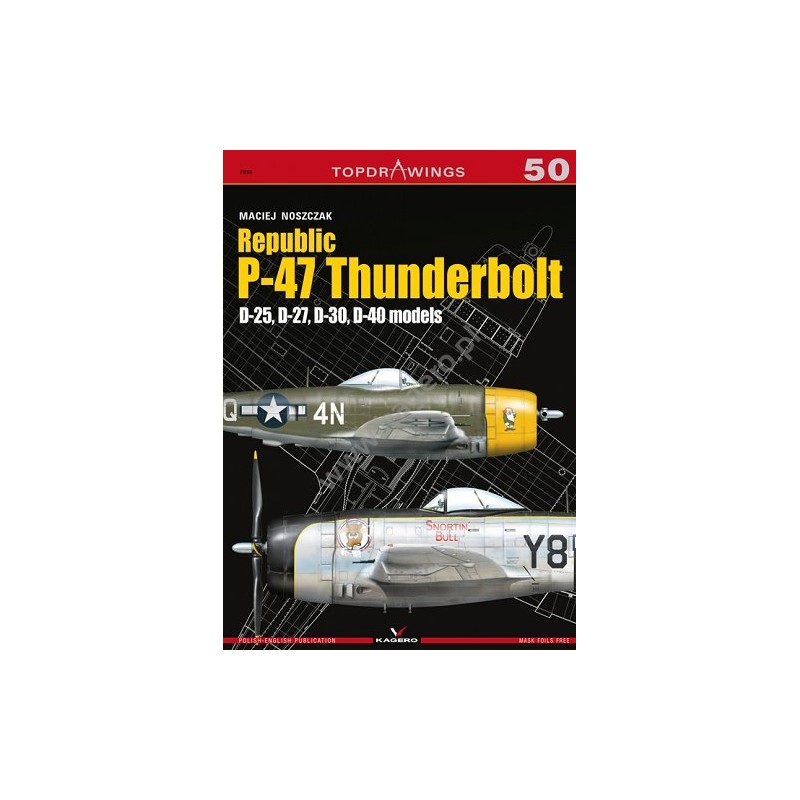 The P-47D was the most produced version of the Thunderbolt fighter. From overall number of 15 683 P-47s built the 12 609 of them were the version D. The first trial P-47D left the factory in September 1942. The first serial version of the P-47D was the D-1-RE variant, which can be easily distinguished from the P-47C by its additional blinds on lower part of the engine cowling. The important change was also the additional cockpit armor.

The most important variant of the early P-47Ds was the P-47D-5 version. It received the installation which injected the water and methanol mixture to the R-2800-21 engine’s cylinders.

During the autumn of year 1943 another variant of the P-47D was developed – P-47D-10 with new R-2800-63 engine. In next version – P-47D-11 – the usage of the water & methanol mixture was automatic. The injection was triggered by the maximum push of the throttle lever. The plane also received the gun camera.

In another version – P-47D-15 – the capacity of the front fuel tank was enlarged, so the maximum range of the P-47 increased too. The D-15 variant was equipped with two B-10 racks under the wings which allowed to make different configurations of the payload (bombs and fuel tanks). Another innovation was the detachable canopy in case of emergency. Also the shape of two lower blinds was modified.

The P-47D-20 received the new engine – R-2800-59 – which had a different ignition system. The D-20 variant also received the higher tail wheel fork and redesigned racks under the wings.

The most important change of the construction took place between spring and summer of the year 1944, when the production of the P-47D-22 and D-23 has started. The D-22 version built in Farmingdale factory received the Hamilton Standard Hydromatic 24E50-65 propeller with 4,01 m in diameter. The planes produced in Evansville (D-23) had Curtiss Electric C542S-A114 propeller with 3,96 m in diameter. The new propellers considerably improved the climbing rate of the P-47s.