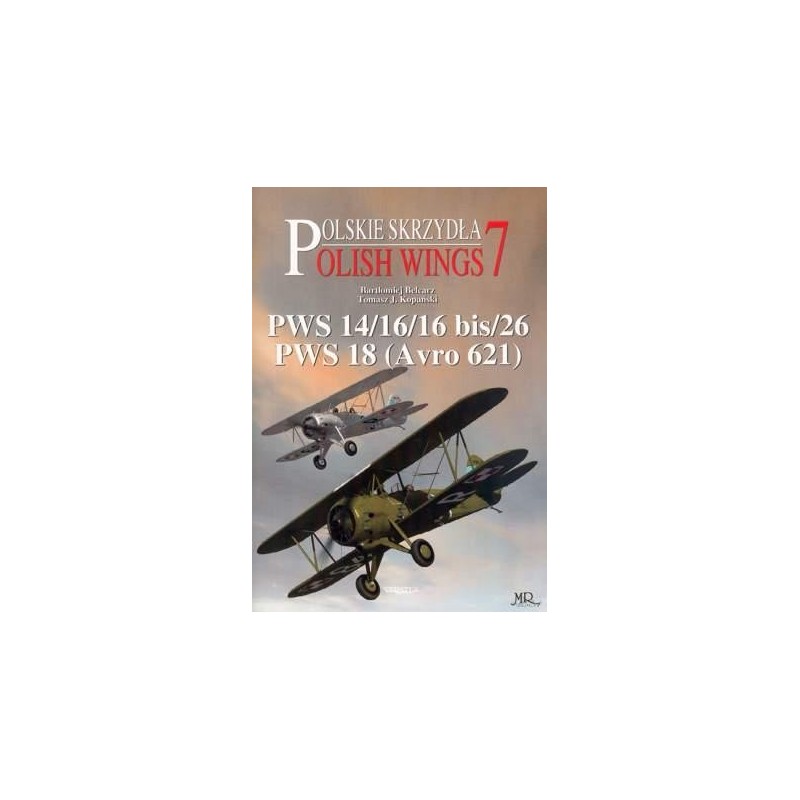 - This is the latest in a series of historical aviation publications dealing with Polish military aircraft, and deals with the basic primary and advanced training biplanes stemming from the PWS 12 biplane trainer of 1929, which evolved into the basic production PWS 14 trainer of 1933. The text does not specify the engines used in these aircraft, but they appear to have been license-built Wright Whirlwinds of unspecified power. Very little technical information is provided, as this work is primarily concerned with colors and markings. These biplanes would have compared closely with the American Stearmans (although perhaps a little smaller), the British Tiger Moth, and possibly the German Bucker BU-131, Gotha GO-45, and Focke Wulf FW-44 Steiglitz. They were produced as PWS 14's, PWS 16's, PWS 16bis's, and PWS 26's, all differing in details and function. In addition, A PWS 18 was also produced, but this was a redesign of an imported British Avro 621 Tutor biplane trainer, with wooden wings replacing the metal ones, and a license built Wright Whirlwind engine. This aircraft is also described and illustrated in detail.

These aircraft were used as primary and advanced trainers, and some were also employed for reconnaissance and ground attack missions after the German invasion in September, 1939. Many were destroyed on the ground by the Luftwaffe, and at the end of the campaign, approximately 60 were flown to Romania and Latvia. More were captured by the Germans and the Russians, and one ended up in Bulgaria, where it was impressed into the Royal Bulgarian Air Force. Heinkel's Mielec plant overhauled and rebuilt many of the captured aircraft, and 28 were sold to Rumania. Several were used into the fifties, but only one survives today at the Polish Aviation Museum at Cracow.

Since there are kits available of this aircraft, including Mikro's 1/72 scale offering, this book will be very useful to modelers and historians. In addition, Techmod (techmod@techmod.com.pl) produces a decal set (No. 72138A) for a number of PWS 26's in Polish civil and military markings, as well as Russian, Bulgarian, and Rumanian insignia, and this information is provided in the text.

The book itself consists of 48 pages of text, excellently produced black and white photos, and over 50 color profile and plan views. These accompany the photos, providing verification of the color and markings details given. The cover drawings are almost photographic in quality, and give a good indication of how these airplanes must have appeared during their service lives. If you have any interest at all in Polish aircraft of the World War II period, this book is a must-have. Get one, and scarf up several 1/72 scale Mikro kits if you want a representation of these excellent Polish training aircraft on your model shelves.