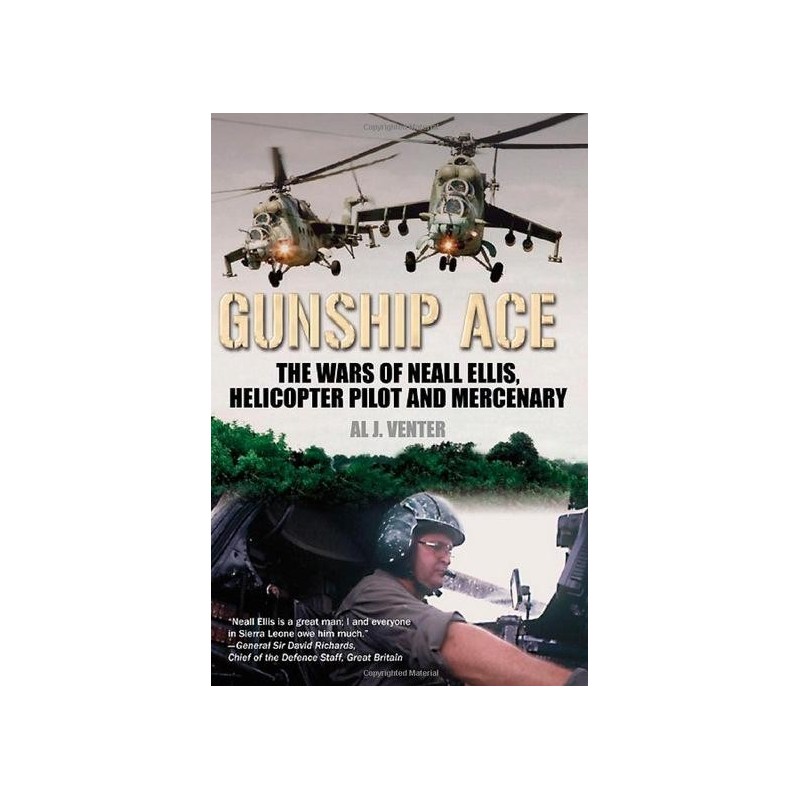 A former South African Air Force pilot who saw action throughout the region from the 1970s on, Neall Ellis is the best-known mercenary combat aviator alive. Apart from flying Alouette helicopter gunships in Angola, he has fought in the Balkan War (for Islamic forces), tried to resuscitate Mobutu's ailing air force during his final days ruling the Congo, flew Mi-8s for Executive Outcomes, and thereafter an Mi-8 fondly dubbed 'Bokkie' for Colonel Tim Spicer in Sierra Leone. Finally, with a pair of aging Mi-24 Hinds, Ellis ran the Air Wing out of Aberdeen Barracks in the war against Sankoh's vicious RUF rebels. For the past two years, as a "civilian contractor," Ellis has been flying helicopter support missions in Afghanistan, where, he reckons, he has had more close shaves than in his entire previous four-decades put together.Twice, single-handedly (and without a copilot), he turned the enemy back from the gates of Freetown, effectively preventing the rebels from overrunning Sierra Leone's capital-once in the middle of the night without the benefit of night vision goggles. Nellis (as his friends call him) was also the first mercenary to work hand-in-glove with British ground and air assets in a modern guerrilla war. In Sierra Leone, Ellis' Mi-24 ("it leaked when it rained") played a seminal role in rescuing the 11 British soldiers who had been taken hostage by the so-called West Side Boys. He also used his helicopter numerous times to fly SAS personnel on low-level reconnaissance missions into the interior of the diamond-rich country, for the simple reason that no other pilot knew the country-and the enemy-better than he did.Al Venter, the author of War Dog and other acclaimed titles, accompanied Nellis on some of these missions. "Occasionally we returned to base with holes in our fuselage," Venter recounts, "though once it was self-inflicted: in his enthusiasm during an attack on one of the towns in the interior, a side-gunner onboard swung his heavy machine-gun a bit too wide and hit one of our drop tanks. Had it been full at the time, things might have been different." The upshot was that over the course of a year of military operations, the two former Soviet helicopters operated for the Sierra Leone Air Wing by Nellis and his boys were patched more often than any other comparable pair of gun ships in Asia, Africa or Latin America. Nellis himself earned a price on his head: some reports spoke of a $1 million reward dead or alive while others doubled it.This book describes the full career of this storied aerial warrior, from the bush and jungles of Africa to the forests of the Balkans and the merciless mountains of today's Afghanistan. Along the way the reader encounters a multiethnic array of enemies ranging from ideological to cold-blooded to pure evil, as well as well as examples of incredible heroism for hire.