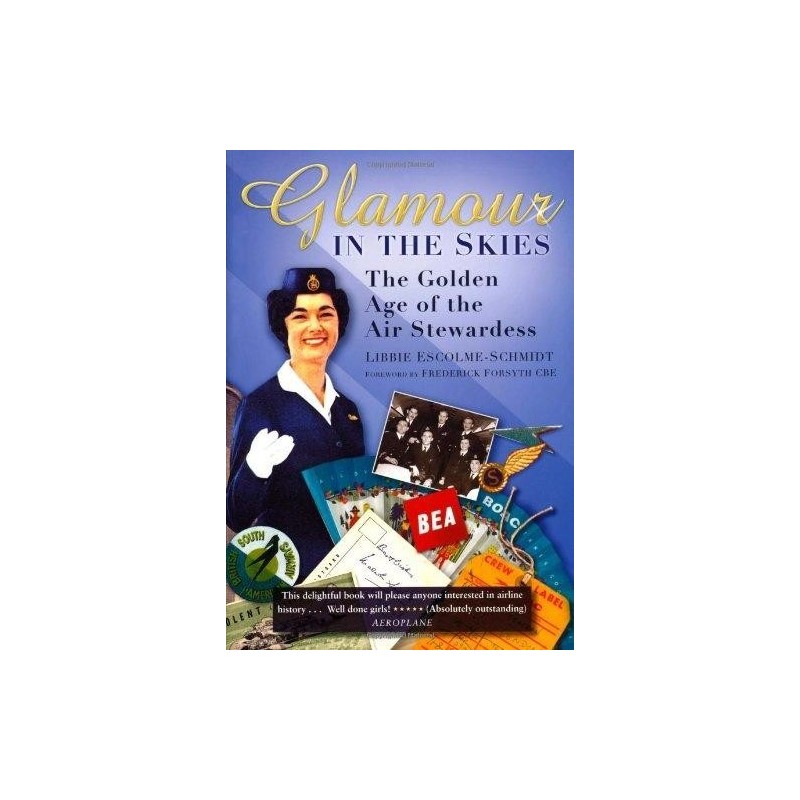 Glamour in the Skies is the first book to celebrate the stewardesses of British Airways and their predecessors from 1936 to 1980, widely agreed to be the golden age of air travel a time which personified optimism, excitement and a feeling of boundless opportunity for both passengers and airline crew. The air hostess, as she was known initially, began her British career in a one-engine propeller plane crossing the English Channel and ended up in Boeing 747 jets and the supersonic Concorde.

Ex-hostess Libbie Escolme-Schmidt combines history with hundreds of surveys and interviews from retired and current cabin crew, enabling the reader to follow the development of the role of the stewardess through the early years of discrimination to her present-day career equality. During this period flying evolved from a potentially dangerous adventure to a remarkably safe and comfortable means of international travel and through it all the air hostesses were there. Their appearance changed over the years, from the 1940s military look to the mini-skirts of the 1960s, and the caring mother figure to the sexy corporate product, as the role was glamorised to almost iconic status, becoming a dream career for millions of young women worldwide. Glamour in the Skies is packed with many anecdotes, ranging from administering oxygen to passengers flying over the Andes, to serving French champagne on Concorde. Covering training, sexual discrimination, disasters, passengers, glamorous stopovers and other temptations, this illustrated book presents the changing times in air travel through the eyes of the stewardess and offers the perfect tribute to the girls who walked the skies. Libbie Escolme-Schmidt OAM was born in the Queensland outback. She has had a varied career, firstly as a teacher in Papua New Guinea, flying for three years with BOAC, before moving into BOACs Training School for six years. She married and returned to Western Queensland, became involved in the beef and wool industry and had two sons. For the past seventeen years she has managed her own training and education consultancy. For her contribution to the development of people and womens advocacy she was awarded the Order of Australia. Libbie founded The Women of the Year Luncheon, an ongoing occasion to celebrate womens contributions to Australia. This fabulous, richly illustrated history of air travel from the 1940s to the 1980s revels in the glamour, the romance and the... realities of life as a trolley dolly in the Jet Age. Sunday Express magazine This delightful book will please anyone interested in airline history... Well done girls! -